SALES GROWTH OF 92% IN THE QUARTER, MAINLY DRIVEN BY: 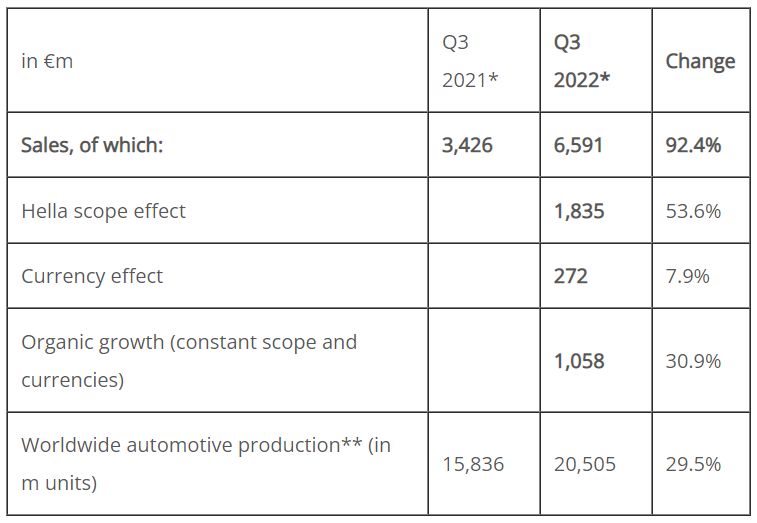 ON TRACK FOR DELEVERAGING AND DISPOSAL PROGRAM, AS WELL AS FOR FINALIZING THE REFINANCING OF THE HELLA ACQUISITION

FORVIA recorded strong sales growth in the third quarter, reflecting market outperformance and the consolidation effect of HELLA, as well as a favorable comparable base in terms of worldwide automotive production.
During the quarter, we outperformed in all our main geographies: in Europe, where semiconductor availability has marginally improved, but also in North America and in China, which has posted a strong recovery after COVID-related lockdowns in key cities.
Given the evolution of global automotive production in the past quarters and the outlook for the end of this year, we are revising upwards our cautious outlook for global auto production for the full year to 77 million light vehicles, from 74 million previously. With this new assumption, and also taking into account the evolution of currencies, we are also revising upwards our expected consolidated sales for the year to between 24.5 billion euros and 25.5 billion euros, against a previous expectation of between 23 billion euros and 24 billion euros.
In a macroeconomic environment that remains challenging, we are laser-focused on three major objectives:
Finalize the refinancing of the HELLA acquisition and deleverage the Group,
Protect our short-term operating margin and our cash generation in a highly inflationary environment,
Continue to build a strong and selective order book, thanks to the unique combination of Faurecia and HELLA’s technologies and innovations.
We will have the opportunity to detail these priorities as well as our short-term and longer-term actions during the Capital Markets Day that FORVIA will hold on November 3, followed on the next day by an event specifically dedicated to our sustainable development roadmap.